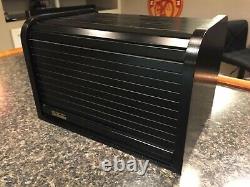 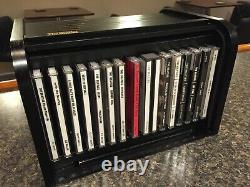 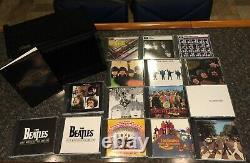 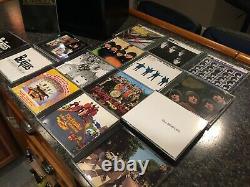 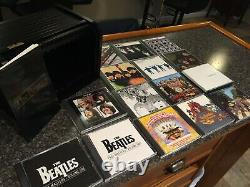 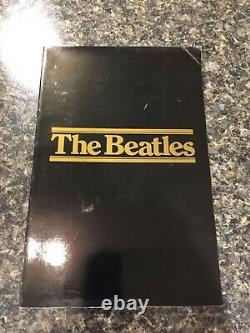 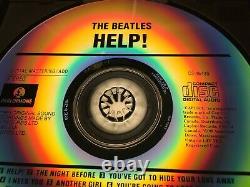 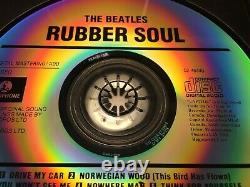 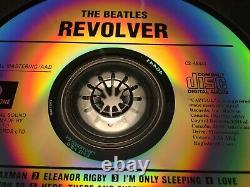 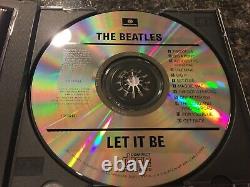 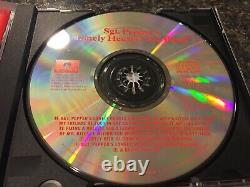 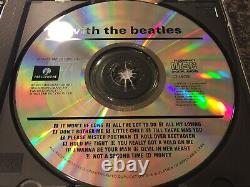 A sixteen-disc Canadian box set compiling the entire recorded works of the Beatles as issued by the band between 1962 and 1970. The box set is the first complete collection of original Beatles material to be released by EMI and Capitol Records on compact disc.

Includes all of the original UK album releases by the band, together with the 1967 US album Magical Mystery Tour. The box also contains the 1988 compilations Past Masters: Volume One and Past Masters: Volume Two, which groups together singles, B-sides, EP tracks, and foreign releases not found on the band's UK studio albums.

The versions of the first four albums included in this box are the digitally remastered mono mixes issued on CD over 198788. The collection is encased in a custom fitted black oak roll-top'bread bin' style 11" x 8" wooden outer box and includs a 64-page soft-cover book with photos and commentary on the songs by Beatles recording historian Mark Lewisohn.

The Beatles (White Album) is the same PCM master used in the U. Sgt Pepper does not come with slip case. These roll-top boxes are notorious for being finicky to open. This one does open fine, but is a bit tight so use caution when opening the roll-top.

The corners on the 64-page book have some curling to them (see photos). Mike Jarratt (brother of Jeff Jarratt - Abbey Road Engineer/Producer) is the engineer responsible for digitizing the master tapes, the first to be the mono Please Please Me master being digitized December 2, 1986. Only the original, first generation master tapes were used for all of the CDs - not production master tape copies. Jarratt digitized the masters with a Sony PCM-1610 VCR adapter on special 3/4 U-matic helical scan tape where the audio samples are recorded as if they were on the lines of a raster scan of video at a sampling frequency of 44.1kHz and 16-bits per sample. 16-bit processing was in its infancy and the studio was not well-equipped in those days.

Jarratt experimented with playing back the master tapes on the original tape machines that were used on the sessions, but determined that the best sound came from using modern machines with 2-track heads. Steve Hoffman has noted that [at the time, other than Capitol Records] there were hardly any studios that had and maintained full-track (mono) headstacks, which should have been used on the mono titles. Jarratt digitized stereo masters for the first four albums, however when George Martin was brought in as a consultant, he OK'd the mono versions. In 1987 when Allan Kozinn asked why they were released in mono, Martin replied Expediency, I think, in a word. Because I wasn't brought into this until December, by which time EMI had made up their mind what they were going to do, and they really consulted me I suppose out of old fashioned courtesy -- saying, you know, don't you think we've done rather a good job?

And when I heard what they'd done, I thought they were dreadful. They had presented me with the stereo versions.

And I told them that if they had to issue any stereo versions, they should be specially looked at, particularly in these early cases, and I don't think the first two should have been put out in stereo at all. And I think that because they had so little time, they said, well look, we'll put them all out in mono, and if you like you can have another look at them, and maybe number three and four can be transcribed for stereo later on. Now, this was because they had a date to adhere to, and they had to press up a great many records, and I guess they had to make some kind of decision, which they made. There has long been speculation that Sgt. Pepper was digitized from a safety copy, however the Tape Log inside the mu-metal cover shows Mike Jarratt having digitized it to the Sony 1610 U-matic on March 4, 1987 (and possibly earlier on June 26, 1986). Additionally, in 2009 Abbey Road engineer (and Beatles "gate keeper") Allan Rouse verified the original first generation tapes were used for all of the CDs and assured that the master tape for Sgt. Pepper has NEVER been missing from the archive/vault. Rouse: With regard to the tapes that were used for the original [1987] CD transfer and the 2009 re-masters.

In both cases they were the original mono/stereo masters. The ¼ master tapes are not a second generation tape, but the original mix masters compiled to form the albums... We do not have EQ'd productions masters from which speculation has arisen that they may have been used for the 1987 release...

The practice of making production masters did not occur at Abbey Road until much later. Besides which any engineer about to embark on a re-mastering a project would ignore the oft used expression seen on an original master tape DO NOT USE, SEE PRODUCTION MASTER? You always want to go back to the original source. You will have to take my word for this but Sgt. Pepper has NEVER been missing and was used for the 1987 release as was Let It Be.

Harry Moss' original vinyl cutting notes were used for when digitizing the tapes. Allan Rouse (2009) When Harry Moss originally cut them he made extensive notes and when new cuts were required he used the original master tape and replicated what he had done before. " Mike Jarratt (1987) "I referred to the original documentation to see what was done in the Sixties. I've had a couple of years' experience as a cutting engineer, so I knew what changed had to be made for purely technical reasons and what had been done for artistic reasons, so I hope I managed to get the best from the tapes.

Jarratt has stated that noise gates, filtering, etc. Were used on a couple of the'White Album' tracks due to the slightly hissy nature of those master tapes.

And Rubber Soul at AIR Studios in February 1987 (presumably the Oxford Circus location, not Montserrat) to a digital 2-track U-matic master. Mike Jarratt (1987) I transferred the original 4-track tape onto a digital multi-track machine, and along I put the original stereo mix, so George had a reference of what he had done originally.

The remixes were then done from these digital tapes. " Martin (1987) "I looked at those and found that the stereos of that weren't very good. They were very woolly, and not at all what I thought should be a good issue.

I went back to the four-tracks on those and actually did remix them - not changing anything, but hardening up the sound a little bit, and cutting down a little background noise. By going back to the four tracks, we get a cleaner sound even than you can get with contemporary recording, because four-track one-inch is a much better medium than 24 track two-inch.

Not having access to Abbey Road's echo chamber and reverb plates in his AIR studio, Martin used digital delay and echo in the mixes which some have said give these mixes an arguably 1980's soundscape. Interestingly, for the first couple of years, Capitol Canada imported their CDs so as a result Help! And Rubber Soul contained the 1987 remixes. In 1990 Capitol Canada decided to manufacture their own CDs at Disque Americ in Drummondville, Quebec, Canada and ordered new masters from Capitol in Hollywood. Mastering engineer Odea Murphy prepared new duplicate masters from Jarratt's 1987 U-matic digitizations of the original 1965 mixes (which I believe Jarratt provided Revolver at the same time) on April 6, 1990 which were sent to Capitol Canada (images of the actual Capitol Canada U-matic tape for Rubber Soul can be found online in The University of Calgary's EMI Music Canada collection). CDs were then pressed using these original 1965 mixes. The earliest anyone seemed to notice this was a mention in a 1999 Usenet posting, but at the time it was dismissed as being a bootleg (or counterfeit). When Capitol Canada began using Cinram in 1995 for CD pressing, they also used the same "incorrect" digital masters Disque Americ used. The use of video for the PCM adapter helps to explain the choice of 44.1kHz sampling frequency for the CD, because the number of video lines, frame rate and bits per line end up dictating the sampling frequency one can achieve, that sampling frequency of 44.1 kHz was thus adopted in the compact disc, as at that time, there was no other practical way of storing digital sound than by a PCM Converter and videocassette recorder combination. Allan Rouse in a 2009 Record Collector interview described the Beatles' master tape storage conditions: Theyre in a room solely dedicated to The Beatles. The temperature and humidity are monitored and fall into line of whats required...

Nothing goes out of this building [Abbey Road Studios in London]. They eventually stopped allowing tapes to be removed from the building, simply for security reasons.

We cant afford to carry those tapes around. There was a point, many, many years ago, when, if something was sent to America, they were sent by hand, via courier; but that wouldnt happen now. What would have happened if the plane had gone down? We prefer them to stay here. So, OK, theyre in this building. Its got two doors on it with combination locks and alarm. Its got two cameras on it, one on the outside, one on the inside. Its got smoke and fire detection. The item "The Beatles Box Set 1988 Roll Top Canadian 16 CDs Like NEW" is in sale since Monday, August 16, 2021. This item is in the category "Music\CDs". The seller is "vinylwall" and is located in Muskegon, Michigan. This item can be shipped to United States, Canada, United Kingdom, Denmark, Romania, Slovakia, Bulgaria, Czech republic, Finland, Hungary, Latvia, Lithuania, Malta, Estonia, Portugal, Slovenia, Japan, Sweden, South Korea, Taiwan, Belgium, France, Ireland, Netherlands, Poland, Germany, Austria, Singapore, Switzerland, Norway, Ukraine, Croatia, Malaysia, Bermuda, Brunei darussalam, Guernsey, Gibraltar, Iceland, Jersey, Cambodia, Liechtenstein, Sri lanka, Luxembourg, Monaco, Macao, Maldives, Pakistan.